Fixing the Blue Screen of Death 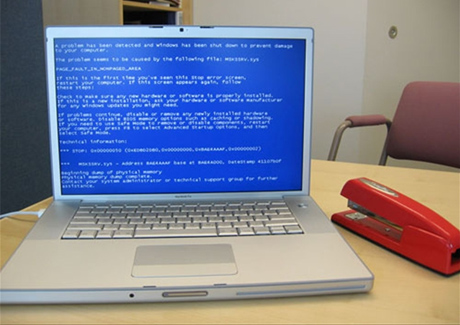 If you care about the files you save on your computer, besides the time you spend working on them, you won’t mind getting to know a blue screen. In simple terms, it is the ultimate sign that your Windows system is going haywire and needs to stop working immediately. In fact, it is called Blue Screen of Death or the Blue Screen of Doom, although technically, it may be referred to as the infinite loop problem, the infamous stop error or simply, the blue screen.

Anatomy of a Blue Screen

Whatever name it goes by, a BSoD is literally what it is – a blue screen that stares you in the face from your computer monitor and wipes out everything you were working on, sometimes even if you have saved them. It appears when your system encounters a terminal error and is forced to lock itself as a way of containing the damage. Sometimes, the system automatically shuts down while in other instances, this has to be done manually. Once the computer restarts, the user is prompted to an option between Safe Mode and Normal Windows Settings. Safe Mode allows the system to operate with damage control precautions and limited functions. On the other hand, Normal Windows Settings will let the system operate normally but puts it at greater risk of file corruption and other damages. On a Macintosh computer, the screen simply turns into a blank, glaring blue but on Windows, it comes with diagnostic information written in white text that indicates the error, its parameters and other data which can be used to follow the problem down to the root. In Linux, blue screens have been noted but are not indicative of any serious problems.

Many things can trigger a Windows BSoD but the most common culprits are improperly installed hardware drivers which can easily be fixed through driver updates. You can do this manually in your Control Panel or by using software like System Optimizer Pro. Other possible causes include incompatible DLLs, defective software and hardware, faulty memory, operating system errors, outdated BIOS entries, corrupted startup files, a ballooning registry, and overheated processors.

Some of the most common STOP errors and the ways to fix them are the following:

Because drivers are the most common causes of stop errors, you should keep yours updated by regularly checking your hardware manufacturer’s site and keeping a tab on their drivers page. This way, you’ll know when you need to do some updates and uninstall old drivers to prevent conflicts. You may have to check your hardware as well since most people encounter BSoD after installing hardware using incompatible drivers. To avoid this scenario, it’s always best to get your drivers from your hardware manufacturer or make sure you’re installing drivers, not the software that comes with the hardware. Another thing you may need to look into is your power supply which can easily cause a blue screen when it’s overloaded. This happens when you upgrade your hardware and exceed the capacity of your power supply as a result. When you upgrade your motherboard, processor or video card, you need to upgrade your power supply as well to meet your system’s increased demands. Memory-related BSoD can be prevented by regularly running one of those free memory diagnostic tools such as Windows Memory Diagnostic. While you can’t stop your memory from failing, you can always buy from a trusted manufacturer that is least likely to give you a substandard product.

Essentially, a blue screen protects your computer from further damage but you’ll never want to see a blue screen in your computing life if you can help it. Each BSoD comes with a memory dump which means when a Windows system crashes, it dumps open, working files at the time of the crash into the hard drive. In worst cases, the entire memory is erased and the dump file may be retrieved only by a trained technician. Not a very comforting scenario at all, especially for those with half their lives depending on their computers. But fret not because the BSoD remains significantly avoidable with the right knowledge and responsible use.